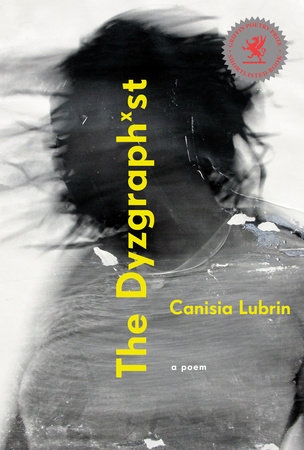 Canisia Lubrin is having quite a year. The Caribbean Canadian writer’s second poetry collection, The Dyzgraphxst has been universally praised, featured on numerous booklists, and shortlisted for many awards. This year Lubrin was also named as McClelland & Stewart’s new poetry editor AND won the Windham-Campbell Literature Prize for Poetry (shared with Natalie Scenters Zapico). This past week The Dyzgraphxst was named the Canadian winner of  Canada’s biggest poetry award, the Griffin Prize—and the year is only half over!

In an interview with Open Book Lubrin says of her work:

The Dyzgraphxst is one of my early attempts to disturb the solidity of modernity, without leaving beauty out. It is a poem structured as seven theatrical acts... each of which is guided by a central curiosity: how does personhood, or the self, come to be in relation to others and the world’s wider ecologies? Given a human-made world, like our current world, which is threatened by climate crisis and the history and continuance of imperialism and capitalism, the title plays on the word dysgraphia, which has Greek roots, meaning ‘difficult writing’ or ‘to have difficulty writing’, or in my more loosely metaphoric interpretation, to write difficult things.

(You can read the full interview, which includes each of the seven shortlisted Griffin Prize poets, at the following link Open Book Interview with Griffin Prize Finalists

To hear Lubrin read from her work, check out this clip from CBC’s Q with Tom Power Canisia Lubrin Reading on Q

Congrulations are also due to the International winner of the Griffin Poetry Prize, Belarusian poet Valzhyna Mort for Music for the Dead and Resurrected. Both winners and the other shortlisted titles are available at OPL, listed below.

The shortlisted titles for the annual Griffin Poetry Prize.