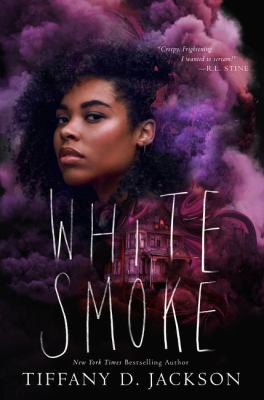 “215 Maple is a blackened charred carcass, with smoke still swirling into the sky, it doesn’t look much different than any of the other houses. In fact, it looks more at home on our block than we do.”

Marigold and her family moved to the charred remains of what was once the perfect suburban town, Cedarville. Their newly renovated house was free, part of an artist's contract between her mother, step-father and the Sterling Foundation. Upon arrival, the neighbours watch them from afar, as if waiting. For what? She’s not quite sure. When Marigold starts hearing voices, seeing shadows and getting sleep paralysis, she doesn’t know if it’s her anxiety or if she’s in grave danger. But what will she do if it’s either? All she wanted was a fresh start, not a house with a past darker than hers.

White Smoke starts off seeming like a classic “move into a new haunted house” book, but was something else entirely. There is a complicated backstory and the author did an amazing job of planning out the story so it all comes together in the end. The foreshadowing added to the huge twist of an ending. It was not as predictable as I first thought, and it was definitely scary and suspenseful!

Marigold deals with anxiety, a reliance on marijuana, guilt over a past overdose, extreme phobia of bedbugs and struggles with her newly blended family and her new friends. These play a huge part in the book because she can’t tell if everything she’s seeing and hearing is real or a result of her anxiety and marijuana use. On top of that, her younger stepsister is out to get her because she knows she will never be punished. The book portrays a realistic family relationship and touches on serious topics, which makes it feel more relatable. In addition to Marigold's personal issues, there is false imprisonment, arson, and a mysterious name that seems to be taking over the town.

The backstory of the town, characters and obvious trauma following both is a compelling reason to keep reading, because you never know when the next piece of the puzzle will be revealed. The characters each have their own lives and secrets which makes the book interesting and realistic. I found that it portrayed the main character's emotions well, and really made you feel in sync and connected with her. There are some recurring factors that were not resolved at the end, so hopefully there will be a second book tying up all loose ends.

Overall, I would rate it a ⅘because though I really enjoyed the book, though some aspects were expected or slow. It had mystery and a great ending. White Smoke was captivating, suspenseful and mystifying, you’ll have goosebumps from the very start!