The history of 2SLGBTQ+ Archives is a history of self-documentation and community storytelling in juxtaposition to either an overtly antagonistic dominant narrative or silence by omission. Ephemera, records, publications, and artefacts were collected by both individuals and 2SLGBTQ+ organizations to support 2SLGBTQ+ rights and preserve community history, the celebrations, and the struggles. Early formalization of community archiving came with the founding of the Canadian Gay and Lesbian Archives out of The Body Politic in Toronto in 1973. More recently, the Canadian Gay and Lesbian Archives updated its mandate to represent a more pluralistic acquisition policy and the name change to the ArQuives. The University of Victoria began acquiring Trans records in 2007, which led to the establishment of the Transgender Archives, the largest of its kind in the world.

Over the last couple of decades and at an increasing rate in the last five years, the archives profession in Canada is addressing the issue of diversity and the overt absence of diversity in archival holdings.

While archives come in all shapes and sizes and you might be surprised who employs archivists (Electronic Arts, EA), archives predominantly reside in institutional frameworks, such as, governments, universities, and churches. These institutions were part of the colonial process, and its global colonization by European actors and alienation of the “other.”  Representing a western European framework and the word and gaze of the dominant paternalistic male view, archives acquired records to reaffirm the importance of white male successes, either limiting other stories or only accessing stories of women, indigenous peoples, blacks and 2SLGBTQ+ peoples through the dominant male narrative. Omission was not necessarily overt but systemic, appraisal decisions made “objectively.” Objectivity driven by personal experience and archival theory bound to European Enlightenment and the French Revolution. As such, one can understand a certain reluctance to entrust community records to traditional archives.

Keeping in mind the dissonance that exists in acquiring 2SLGBTQ+ records, the City of Ottawa Archives would like to continue to work with the 2SLGBTQ+ community to ensure the long-term preservation of records either through donation to the Archives or through the provision of technical expertise to community archives.  Further, we have an open-door policy, for access to records that have been processed and are ready for public access.

The City of Ottawa Archives holds over 4 linear metres of records donated by Gary Sealy, the most extensive of which are the LAMBDA records. Also included in Gary’s donations are records from Club Moustache, Gay, Lesbian, Bisexual and Transgender Community Centre, Grant Taylor Society of Excellence, Second Century Club, International Lesbian and Gay Association (ILGA), Sappho and Egale. The Archives also holds records for Capital Pride. While the Capital Pride records continue to be processed, we hope to have them publicly available by the second quarter of 2022.

Through the Archives Ottawa Journal photographs, the Archives has documentation of protests that occurred in the 1970s. The provided photographs are two examples, one photo shows a protest outside the Ottawa Journal offices, 1975 and the other shows a protest that took place outside the Ottawa Police station, 1976. Protests were sparked by the fallout of the arrest of Michel Gravel on March 3, 1975. He was arrested for running two male nude modelling agencies that were used as a front for a prostitution service. The story became sensationalized. 17 of the 18 customers of the agencies were arrested between March 4 and 20th, names, ages, addresses and occupations were released to the media. National news and local outlets, including the Ottawa Citizen and the Ottawa Journal called the event a ‘homosexual vice-ring or a ‘white slavery ring’. People lost their jobs, their lives thrown into disarray, and the most tragic, Warren Zufelt committed suicide with the release of his name on March 18th. 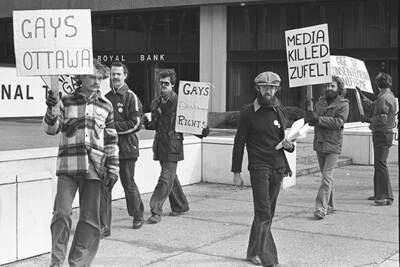 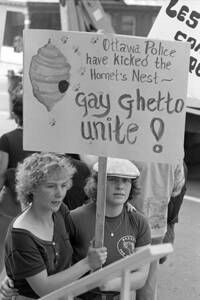 The City of Ottawa Archives is committed to ensuring that all communities of Ottawa are preserved — that all have a voice.

As an Archives, we are not alone in our goals to better represent the 2SLGBTQ+ communities; while work has been ongoing for the last two decades — in the last five years, diversity has become the main topic of both discussion and action. A demographic shift is occurring within the Archives profession and with that shift new stories are being preserved and told. Even in areas that are perceived to be the conservative heartland, such as, the City of Red Deer, queer voices are preserved. Recently, in fact, the Red Deer Archives increased accessibility to a Lesbian and Gay oral history project from the 1990s by digitizing the audio cassettes. It is with these small simple steps that we begin to elucidate 2SLGBTQ+ history.