Home » Staff blogs » We Still Demand: A History of 2SLGBTQ+* Rights and Activism in Ottawa – Part 2

We Still Demand: A History of 2SLGBTQ+* Rights and Activism in Ottawa – Part 2

To celebrate Capital Pride 2021, OPL welcomes guest blogger Glenn Crawford. This is Part 2 of his blog series “We Still Demand: A History of 2SLGBTQ+* Rights and Activism in Ottawa”.

The ‘We Demand’ demonstration in 1971 inspired a small group of gay men to form Ottawa’s first queer rights organization less than a month later. The group met for the first time in Maurice Bélanger’s and Michael Black’s apartment at 906–270 Somerset Street W on September 14, 1971. The name Gays of Ottawa/Gai(e)s de l’Outaouais (frequently shorted to GO) was coined on October 13 that year and their initial mandate was to lobby on behalf of gays and lesbians, to act as a community organization and educate the mainstream community about homosexuality. They worked at unpacking years of internalized homophobia within the membership, instilling what we would now call ‘pride’, however, the organization was sometimes mistrusted by closeted queers, particularly those that were white collar, who felt that making the community too visible was ‘rocking the boat’ – possibly exposing their identities which they’d taken great pains to keep private.

As the organization grew, it became a leader in both local and federal queer liberation activism, often organizing national conferences on human rights, putting tremendous pressure and strain on these few early activists. Denis LeBlanc, an early GO member, recalled a typical day of the week would involve a full day’s work followed by a meeting or two, then drinking and dancing at a bar in the hopes of meeting someone, then finally sleeping for a few hours before it started all over the next day.

GO established a phone support line, a monthly periodical called GO Info, a lending library, held support groups and meetings, as well as holding social dances and lobbying for civil rights. They raised awareness and money for legal fees in cases of workplace discrimination like the John Damian and Barbara Thornborrow cases (both fired for being gay or lesbian) or for the men accused in an Ottawa bathhouse raid in 1976. They also raised awareness and began educating police on queer rights and safety concerns after a particularly violent spate of hate crimes and murders in the summer of 1989.

Fundraising for all their activities was a consistent challenge, and GO, which changed names frequently to be ever more inclusive of the community, decided to form a new sister organization called Pink Triangle Services (PTS) in 1984, so that this new queer organization could become a registered charity, a first in Canada. PTS would take on GO’s social and support services such as the coming-out groups, the library, and the helpline, while GO kept the political activism, the GO Info periodical, and the dances, primarily.

GO members organize Ottawa’s first Pride event, a picnic of 50 in Strathcona Park, in 1986, and our first Pride festival, complete with a parade of about 300, in June 1989. As the community became more visible and diverse, many other groups formed out of GO, such as the AIDS Committee of Ottawa, sports and cultural groups, a separate Pride Committee, groups supporting queer women, etc. All this splintering off of smaller, unique organizations and groups ultimately had a destructive effect on GO as the community’s de facto community centre, and it eventually folded in 1995. 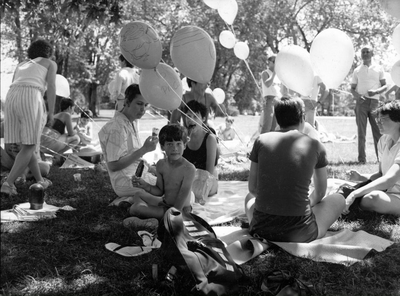 Once divided, it was harder to bring the diverse community back together again for important issues, and an effort to try to create a community centre in 2006 ultimately failed. However, many if not most of the surviving local community organizations were direct offshoots of GO, and have been instrumental in significant civil rights initiatives, such as EGALE Canada, which was heavily involved in the national fight for equal marriage, and the AIDS Committee of Ottawa and Bruce House, which supported people living with HIV and AIDS during the height of the epidemic in the 80s and 90s, and beyond. GO has a proud legacy, building a community from the ground up and helping to bring it ‘out of the closet and into the streets’.

Living in Ottawa for over 40 years, and a new Gatineau resident, Glenn Crawford is proud to call the National Capital Region home and has been actively involved in the queer community for over 15 years. He acted as chair of the Village committee from 2006 to 2012—when, among other achievements, Village street signs were successfully installed along Bank Street, officially designating the area as Ottawa’s queer village. Crawford was elected as the 2010 Capital Pride grand marshal and awarded the 2007 Hero Award for Community Activist of the Year. Since 2016, he has been the researcher and developer of the Village Legacy Project on behalf of the Bank Street BIA, creating a Web site [www.villagelegacy.ca] and mobile app on the history of Ottawa’s 2SLGBTQ+ movement. A self-employed Web and graphic designer for over 18 years, Crawford also created public art for the Project, including a set of 40 banners honouring community leaders that were unveiled in 2018.