Home » Staff blogs » We Still Demand: A History of 2SLGBTQ+* Rights and Activism in Ottawa – Part 3

We Still Demand: A History of 2SLGBTQ+* Rights and Activism in Ottawa – Part 3

To celebrate Capital Pride 2021, OPL welcomes guest blogger Glenn Crawford. This is Part 3 of his blog series “We Still Demand: A History of 2SLGBTQ+* Rights and Activism in Ottawa”.

On the 50th anniversary of the “We Demand’ demonstration, and the 10th anniversary of the official Village designation on Bank Street between Nepean and James Streets, where is the Ottawa queer community today? With many victories in human rights battles, such as equal marriage, anti-discrimination laws, and more societal acceptance of 2SLGBTQ+ people, some in the community may feel that most of the challenges our community has faced are now behind us. 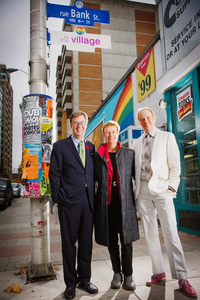 But this ignores the particular challenges queer black, Indigenous and people of colour (QBIPOC) continue to face within their own racial communities, the mainstream queer community, and mainstream society, and an alarming rise in far-right wing beliefs.

These challenges became clear with controversies surrounding the Black Lives Matter movement within Pride, where they urged the organization to disallow armed and uniformed police officers in the parade. Many people in the community who never felt racial prejudice and harm at the hands of police were not initially supportive of this activism, and reaction to BLM activism was mixed. However, recent tragic events such as the murder of Abdirahman Abdi in 2016 in Ottawa and George Floyd in 2020 in Minneapolis, for example, have raised greater awareness of this issue within the entire 2SLGBTQ+ community. 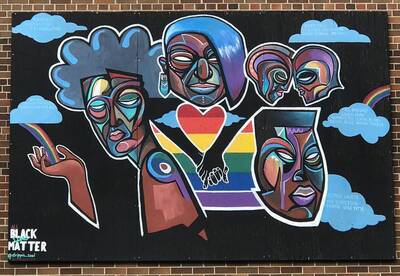 Additionally, concerning is as our community becomes more assimilated within mainstream society–and as queer culture moves more online in virtual spaces and platforms–businesses, bars and organizations once catering specifically to the 2SLGBTQ+ community have closed or are struggling to remain open.

As for what’s left, new, smaller organizations such as Saefty are doing tremendous work supporting trans youth in Ottawa, for example. The Wabano Centre for Indigenous communities offers support and education for Two-Spirit members. Several organizations such as Capital Rainbow Refuge raise funds and offer support to those hoping to flee countries that continue to persecute, jail, or execute 2SLGBTQ+ people. The Ottawa Senior Pride Network has become a vibrant and active organization, with many members who were originally involved in creating early 2SLGBTQ+ organizations like GO and Pink Triangle Services–now known as Kind Space–back in the 1970s and 80s.

As awareness of emerging queer intersectionalities and identities continues to grow, such as with non-binary people, new causes, initiatives, and the groups that will champion them, will develop. Will there also emerge a desire to create new gathering spaces or has our community simply moved beyond that need for the most part? Has the community, to an extent, become a victim of its own success? Huge crowds during Pride seem to suggest there is still interest to have large scale community gatherings again. The next 50 years for our community will be shaped by how strongly queer youth of all backgrounds and identities wish to get involved in activist causes and create new safe spaces to meet.

Living in Ottawa for over 40 years, and a new Gatineau resident, Glenn Crawford is proud to call the National Capital Region home and has been actively involved in the queer community for over 15 years. He acted as chair of the Village committee from 2006 to 2012—when, among other achievements, Village street signs were successfully installed along Bank Street, officially designating the area as Ottawa’s queer village. Crawford was elected as the 2010 Capital Pride grand marshal and awarded the 2007 Hero Award for Community Activist of the Year. Since 2016, he has been the researcher and developer of the Village Legacy Project on behalf of the Bank Street BIA, creating a Web site [www.villagelegacy.ca] and mobile app on the history of Ottawa’s 2SLGBTQ+ movement. A self-employed Web and graphic designer for over 18 years, Crawford also created public art for the Project, including a set of 40 banners honouring community leaders that were unveiled in 2018