Follow the story of country music from its humble beginnings in the early 20th century to the mega-concerts of the 1990s.

Stream all 8 episodes of Country Music now at Access Video on Demand at Ottawa Public Library. 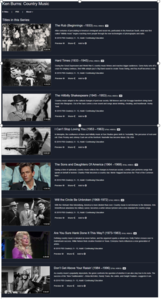 To watch more films by Ken Burns available at Access Video on Demand,

Search the Catalogue by Author Burns, Ken On the left column, Filter your results by Streaming Video

You can browse the search results and watch your favorite series anytime, anywhere, for free!